All I Want For Christmas Is A Patent

If patents aren’t the first thing to spring to mind when someone mentions Christmas, then you wouldn’t be alone. However, for as long as there has been Christmas (well, since the early 1900s anyway) there have been Christmas-related inventions.

Let’s have a look at some of the best (and worst) Christmas-related patents.

Nothing says Christmas more than snow. But what if there’s no snow to be had? Edwin Bruen of New York solved this problem when he was granted a patent in 1908 for a device that produced an artificial snowstorm.

In this invention, a container filled with white confetti was placed on top of a Christmas tree and air was pumped through the container to blow the confetti out and simulate a snowstorm.

Unfortunately, the patent is silent as to whose responsibility it would be to clean up the not insignificant mess the invention would make. 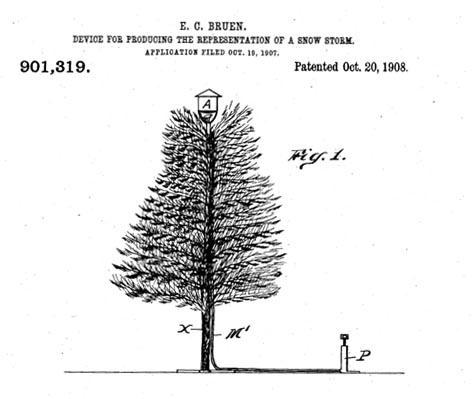 In 1939, prankster Arthur Mahaffy of Toronto, Canada was granted a patent for a detonator for a Christmas cracker.

The problem the patent set out to solve was that existing Christmas crackers gave “but a single detonation when pulled”. However, this invention allowed for two or more successive detonations which, according to the inventor, had the effect of “vastly increasing the surprise effect and the amusement when a cracker is pulled”.

No doubt good times were had by all in the Mahaffy household at Christmas in 1939. 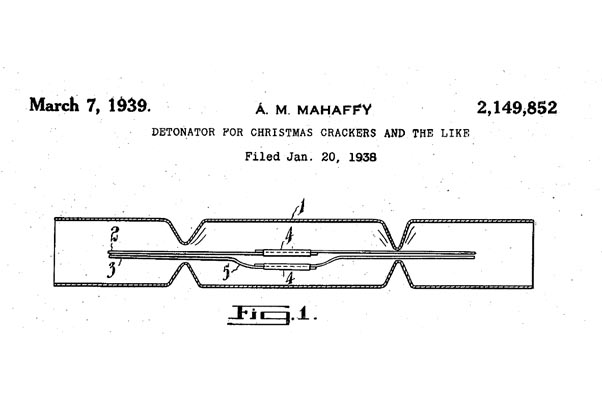 Lying to your children is a big part of any parent’s Christmas, and in 2007 John Colak, of Edmonton, Canada, provide parents with some extra help making their lies believable with his “Santa Claus Visit Kit”.

The kit, which included a Christmas diorama and a device for making Santa-sized boot prints, came with a complex set of instructions to ensure that the wonder of Christmas could be maintained for another year. 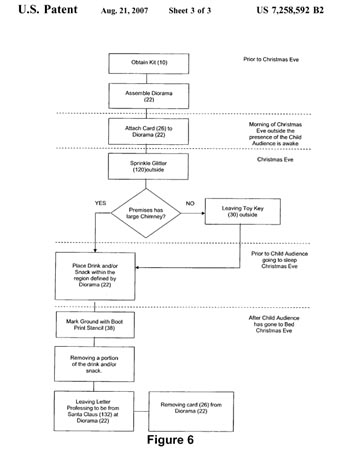 James O’Dell of Pittsburgh, Pennsylvania, was awarded a patent for a snowball gun in 1952.

The gun had two barrels: a first for transporting fresh snow to a charge-forming chamber at the rear of the barrel, and a second for firing compacted snow pellets formed in the chamber at your enemies.

The patent talked about the benefits of the invention, in that “pellets may be propelled with considerable accuracy over an appreciable distance”. However, obviously sensing that there may be some questions asked about the safety of literally bringing a gun to a snowball fight, the inventor went on to state that “the pellets are not compacted to a point where they are dangerous or likely to be injurious to a person should he be struck by one”.

Although not recorded by history, it’s probably safe to say that every 10-year old that received one of these guns would have tried to make their snow pellets as injurious as possible. 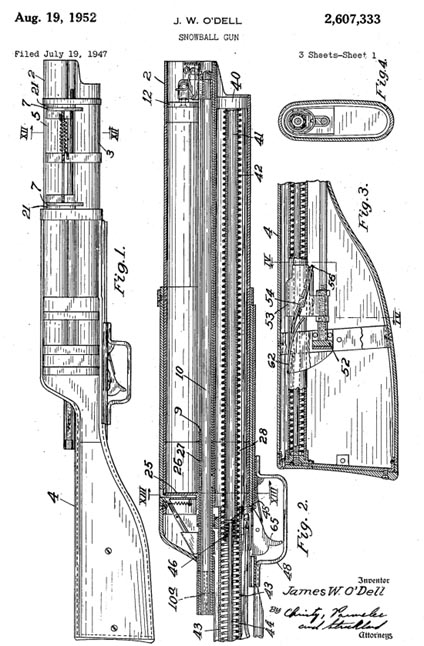 Hollywood would have us believe that Christmas is a time for romance, and Ronald Mosca or Glendale, Arizona certainly seemed to agree when, in 1984, he patented his “mistletoe supporting headband”.

While pretty obvious what the purpose of this invention is, the patent helpfully spelled out that the object of the invention was “to display a piece of mistletoe above the forehead of its users, so as to entice a person or persons to kiss the wearer”.

Times have changed since 1984, and it’s likely that anyone wearing one of these to their Christmas party in 2021 would probably find themselves with an appointment with their HR department the following day. 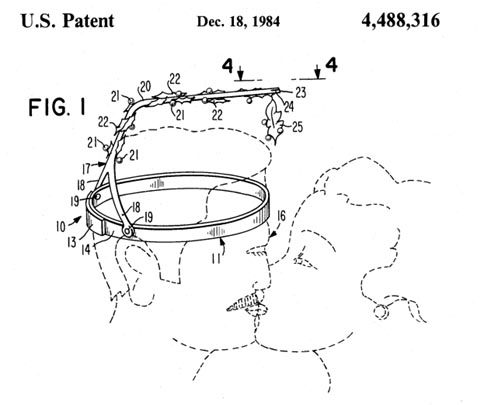 Do you have a Christmas invention? If so, contact the team at Kings today.

Why You Should Engage A Patent Attorney

Why You Should Engage A Patent Attorney It is a popular misconception that the process of drafting a patent application is straightforward and can be undertaken by an inventor to save on the costs of engaging a patent attorney. It is easy to see why

All I Want For Christmas Is A Patent

All I Want For Christmas Is A Patent If patents aren’t the first thing to spring to mind when someone mentions Christmas, then you wouldn’t be alone. However, for as long as there has been Christmas (well, since the early 1900s anyway) there have been

Registration Of Ownership, Not Ownership By Registration Your brand name is a significant business asset that distinguishes your goods and/or services from those of another trader and serves as a badge of origin and/or a guarantee of quality. Therefore, seeking protection of your brand name